So, if you know anything about me, you know that I’m a political junkie (and if you don’t know much about me, head over here). I can be perfectly content watching CSPAN and refreshing my Twitter feed than doing most other things. I also get excited about books (fiction & nonfiction alike) dealing with one of the issues I’m most passionate about – getting more women, young people, and progressives in office. In fact, I’m really hopeful about 2018.

When I heard about Amanda Litman’s new how-to guide about campaigning and running for elected office – geared toward millenial progressives – I had to get my hands on it. It was also making the rounds in my social media bubble, no thanks to my work with a young women’s civic engagement nonprofit.  Oh, and just my luck – Atria Books included Run for Something in a collection of free ebook downloads over the Women’s March weekend. Done! 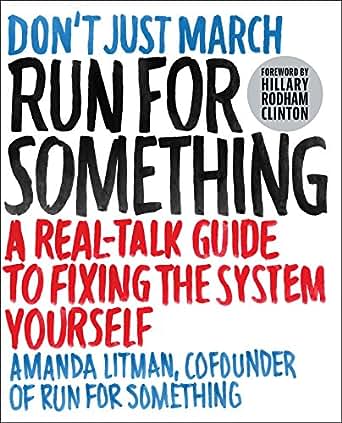 Title: Run for Something: A Real-Talk Guide to Fixing the System Yourself

It’s true – everyone responded differently to the results of the 2016 Presidential election. Amanda Litman, young Democrat and veteran of both the Obama and Hillary campaigns, decided to found a new organization dedicated to building a Democratic bench of young, progressive candidates across the United States: Run for Something. It now operates candidate trainings, supports and endorses declared candidates, and connects volunteers and donors to campaigns.

This book, then, is a product of Litman’s advocacy. It’s geared toward millenials and young people who have marched, called their representatives, and become Twitter activists and are now thinking – what next? Litman says: run for something. There’s no better way to make change.

Structurally, this book is totally straightforward. It’s roughly divided into 2 main sections: why you should run, and how to run. It’s further broken down into categories; for example, how to reach voters, how to raise money, and how to craft a message. The format is incredibly easy to read – the colors and graphics are attractive, flowcharts and summary lists make in-depth information easily digestible, and short essays written by notable young elected officials (think Cory Booker and Jason Kander) break up the monotony (if there really is any). Short on-topic quotes feel like social media soundbites, and in fact, the entire work reads like you’re just having a great chat with Litman over coffee. I think the choice to have this book look and feel like a ‘guide’ (in her words, a Choose Your Own Adventure book) and not a traditional nonfiction work pays off. Litman discusses her distaste for the myth that running for office requires secretive knowledge that only insiders or politicos have access to, and she made sure this book’s selling point is accessibility.

The second selling point of Run for Something is absolutely Litman’s advice, based on her own professional experience. She offers her take on everything from what types of advertising you should spend your campaign cash on to how to decide which office to run for. Her tips are succinct, smart, and straightforward. She defines concepts and words where necessary and assumes no prior knowledge or experience – as evidenced by a thorough Appendix at the end. She includes checklists and plans to fill out when you’re ready to run. Despite her relative lack of name recognition even amongst those in-the-know, you also feel that you can trust much of her advice. She makes sure you know it’s backed up by the elected officials she quotes, including Hillary Clinton, who makes a guest appearance in the beginning.

At the same time, it’s crystal clear that this book is a direct response to the 2016 election and the first 6 months of the Trump agenda. Litman does not hold back her partisan commentary, and while it’s not necessarily a detractor from her core message, I’m not sure how it will age. Obviously, in order to get young progressives on board in 2018, you have to appeal to their desire to combat the Trump agenda. Even while Litman acknowledges that it’s not enough to be against something, and that you have to stand for things, it sometimes seems her book reads otherwise.

Run for Something is aimed at young, Hillary voting Democratic progressives – many of whom are not as interested in envisioning more radical solutions to 21st century problems, perhaps beyond free-market capitalism or a two-party system. Litman wholeheartedly argues that you can’t change anything if you’re not inside the system – want to fix the party? Join it. I get it – I do, and in some ways, I agree.

But at the same time, even as Litman lightly criticizes the Democratic Party’s institutional structure, she offers nothing to those looking to change or critique politics, perhaps, more broadly. Her solution is to run for something. While I absolutely want to see broader, more diverse representation in elected office in this country, and while I want everyone to be able to run and to feel equipped to win, I also want young progressives to dream bigger and not let parties and their organizational structures quash creative solutions to our most pressing issues.

Overall, if you’re inspired to action by New York Times push notifications, want to engage with your community, and are itching to do more than march – pick up a copy of Run for Something and get on board with an organization that will help you do it. Run for Something is only one of many wonderful organizations helping to train and elect women, people of color, millennials, and progressives in the US. Litman has done future (and current) candidates a huge service with this book, and while it’s limitations are certainly present, they’re overpowered by the advice at the heart of it – the specifics about strategy, tactics, to-dos, how-tos, and who-to-knows – all of which will surely transcend our specific politics of this moment.

Have y’all heard of Run for Something or similar organizations? Interested in running for office in the US? Let me know if this is something you want to pick up or if you liked it!